Notice: Undefined variable: pagina_blog in /home/locknmore/public_html/wp-content/themes/locknmore/single-post.php on line 6
How to Remove a Stuck or Broken Key 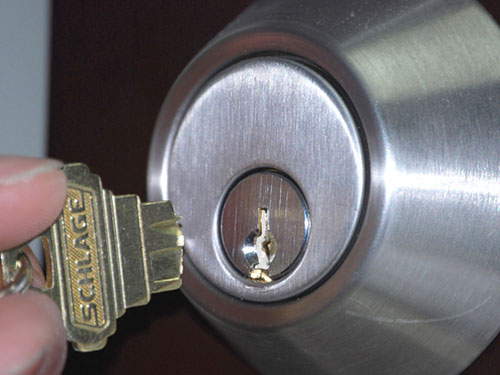 We constantly deal with locks and keys. Between house keys, car keys, and office keys, there are plenty of opportunities for things to go wrong. And, it never happens at a good time. If you have a house key broken in the lock, or your car key broke in the ignition, there’s nothing more frustrating than a piece of metal standing between you and the rest of your day! 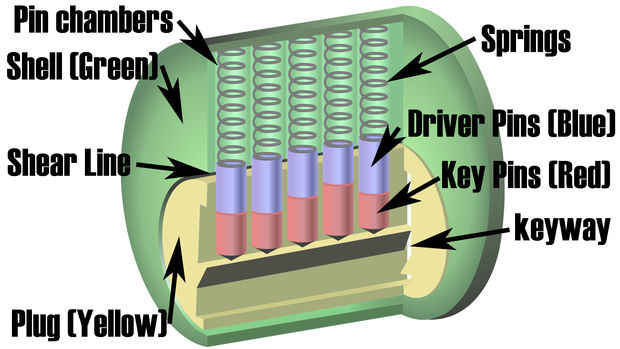 How Your Locks Work

Modern locks are delicate mechanisms. Keyed locks contain several movable pins. Each pin has two parts; a top (driver) pin and bottom (key) pin, with a break in the middle. In order for the lock to turn, those breaks must line up with the shear line, where the rotating keyhole plug meets the lock’s outer housing, or shell. If those breaks don’t line up at the shear line, then the key can’t turn the plug and operate the lock. 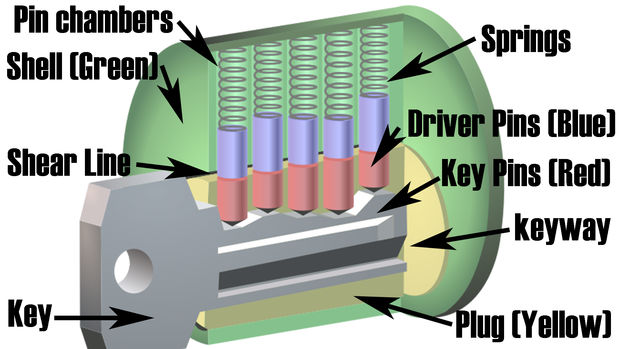 Each pin separates at a different point. These staggered separations perfectly match the cuts along the lock’s corresponding key. That’s what makes the lock work only with its specific key, and no other.

When there is no key in the lock, springs inside push the pins down so that the breaks don’t line up at the shear line. This prevents the plug from turning. But, when you insert the correct key, the cuts on the key lift the pins just the right amount to move the pin breaks to the shear line, freeing the plug to rotate.

How Keys Get Stuck or Broken in the Lock

With small, moving parts that must fit together precisely, you can

see how locks can malfunction. Parts wear, bend, or accumulate dirt. Or, keys wear down and prevent the lock and key from working well together. Over time, humidity and dirt accumulate inside the lock and create a gummy mess that interferes with moving parts. Sometimes the entire plug becomes loose, throwing off the lock’s alignment. Any of those occurrences can cause the key to get stuck in the lock, or to break off when you try to turn it.

How to Remove a Key that is Stuck in the Lock

Don’t keep trying to pull a stuck key out using all your strength. Instead, press your finger on the plug, and gently try to move the key in and out, using any available wiggle room. Sometimes, manipulating the plug and the key will realign them enough to release the key. Be careful, though; you don’t want a stuck key to become a broken key!

If that fails, try lubrication. Silicone spray is highly recommended for this use. It comes in a spray can with a pinpoint nozzle for easy application. Graphite spray is another option. Don’t use it too much, though. It is a solid substance that can build up inside the lock.  Many people already have WD-40, and that will also work, though it is not ideal. WD-40 changes chemically over time in ways that are not good for the lock. Plus, dust and dirt get into the keyhole and can stick to oils in the WD-40, creating a gummy buildup.

How to Remove a Key That Broke in the Lock

Removing a broken key is more challenging, because the head of the key is not there to grab. Fight the impulse to reinsert the part of the key you are holding into the lock, hoping the two pieces will still work together. That is unlikely to work and will just push the broken piece deeper in, making it harder to extract.

If the piece in your hand has some of the key cuts on it, then the lock was not partially turned, and you can proceed to the extraction methods below. If only the key’s head is in your hand, you may have slightly turned the plug when the key broke. In this case, use a screwdriver to make sure the keyhole is completely vertical.

Next, spray a little silicone or graphite into the keyway. This will lessen friction that might make it harder to extract the key. Then, try any of the following:

These methods should work for you. Be gentle when trying them. If you use too much force or try to use the wrong tools, you can damage the lock and incur more expense. If none of these methods work, call your local locksmith to perform your home or car key extraction and get you back inside. For problems involving a broken car key, your automotive locksmith can also make a replacement car key for you, generally at the same time.

As always, prevention is the way to go. Keep your locks maintained and lubricated and always replace worn keys. Hopefully, then, none of this will be necessary!